Lets start exploring the various relationships between sets. Lets look at the first two type: the union and intersection of two sets.

The union of two sets A and B is the collection of elements which are in A or in B or in both A and B (1). The symbol ∪ (2) is used to represent this concept in mathematical statements.  Such a relationship can also be expressed using a Venn diagram (3).   The orange areas represent the union of both sets.

Given two sets, there is sometimes the need to know what elements the sets have in common. The intersection of two sets A and B is s a math term used to describe the collection of elements which are in A and B (1).  In mathematical statements, the symbol ∩ (2) is used to represent this concept. This concept of intersection can also be expressed in a Venn Diagram (3).  The orange area represents the intersection of Set A and B. 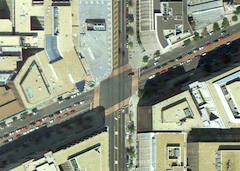 Most of the basic symbols of logic and set theory in use today were introduced between 1880 and 1920. The symbols ∩ and ∪ were introduced by Giuseppe Peano (1858-1932), an Italian mathematician, for intersection and union in Calcolo geometrico (“Geometrical Calculus”) secondo l’Ausdehnungslehre di H. Grassmann (1888).