Babylonia existed from about 18th c. BC until the 6th c. BC. This nation existed in the southern region of Mesopotamia between the Tigris and Euphrates River. Today, this area of the world is now part of Iraq.

The Babylonians used one of the earliest forms of written expression: the cuneiform script. They wrote in soft clay tablets using a wedge-shaped reed stylus. When the clay was hardened in the sun, the writing permanently became a part of the tablet.
They used just two symbols to define the 59 digits as follows:

The Babylonians wrote their numbers from right to left. The rightmost slot in any number has a multiple of 1. The multiplier for the next slots to the left of this column increased by a multiple of 60. The Babylonians defined their numbers by using one or more of the 59 digits from above. Although the Babylonians understood the concept of nothingness, they did not have a symbol for the digit or value of zero. They would leave a space or use a non-numeric placeholder to indicate that no digit was defined for a position within a number.

Now let’s use this knowledge to translate a Babylonian number (A).

We first translate the Babylonian digits into a Hindu-Arabic number and we multiply it by the multiplier associated with its position (B). We add the values of each position and come up with the value for the Babylonian number (C).

In one of my earliest blogs (“Expressing Mathematically”), I introduced the idea that mathematical concepts and skills can be expressed in different ways. Our senses identify natural and artificial objects {world model} that convey math concepts. We use language to identify and communicate our understanding of the sensed math concept written and spoken ways {language model}. We also use geometric curves, shapes and volumes to represent these objects {visual model} in a 2D or 3D mathematical world. We can also plot our visual models on a coördinate plane or volume {graphical model} to generate numerical data about the geometry. Finally, we can express mathematical concepts and skills using symbols, numbers, variables and equations {numerical model}. Keep in mind that all these models are different aspects of what we generally refer to as mathematics. I will use these terms often throughout future blog to explore math concepts and skills through these unique perspectives.

Today, we are going to take a closer look at the elements that make up the set of natural numbers. If you remember from a previous blog, this set represents all positive integers within the set of real numbers.

All real numbers (which include natural numbers) are made up of one or more digits. The digits we use in our modern numbering system are 0,1,2,3,4,5,6,7,8,9. Note that there are ten numbers that are made up of one digit (0-9). There are ninety two-digit numbers (10-99), and there are one thousand three-digit numbers (100-999). All real numbers can be expressed in this decimal notation, even fractions. This will be looked into in a future blog.

The position of the digits within a numeral is as important as the digits themselves. The numeral “476” is not the same as the numeral “674” even though both numerals use the same three digits: 4, 7, and 6. In order to understand why this is the case, we need to understand the decimal number system. I’ll show the structure of this system by illustrating the number “six hundred and seventy-four” in three different ways. 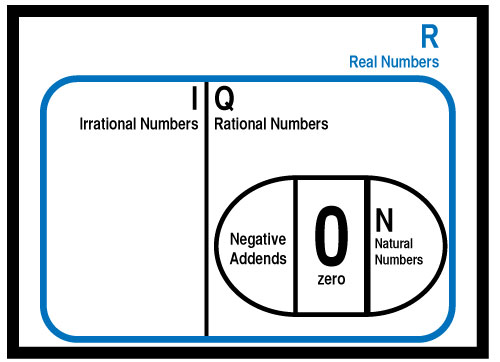 The first numbers to be invented in many cultures were counting numbers. It evolved out of a universal need to document how many objects we have in a particular situation. The related concept of addition developed for similar reasons. In mathematics, we call these counting numbers the set of natural numbers. This set is usually represented as {N}. The elements of {N} are {1,2,3,4,5,6,7,8,9,10,…}.

When we are counting, we are adding objects together to find its quantity. But what if we were to remove objects from a group? The need to express the removal of objects lead to the creation of negative forms of natural numbers. The related concept of subtraction developed for similar reasons. We call this set negative addends. There is no letter of the alphabet that is commonly used to represent this set. The elements of this set are {-1,-2,-3,-4,-5,-6,-7,-8,-9,-10,….}.

When I have four objects in my hand and one person takes two objects and a second person takes two objects, how do I mathematically express the fact that I no longer have any objects in my hand? A numerical symbol was needed to represent “nothing.” We use the symbol called zero. This is a set that has only one element,  the symbol we use to represent “nothing,” {0}.  It is also an important placeholder used in the decimal notation system as well as expressing any numbers greater than 9. 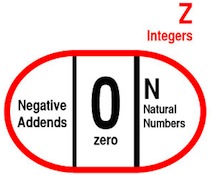 For the longest time, mathematicians believed that all numbers could be expressed as a fractions: the ratio of two numbers, like ¾. They referred to these numbers as rational numbers. This set is usually represented as {Q}. We will explore the concept of fractions in future blogs.  Even integers can be expressed as fractions (for example, 3=3/1, -5=-5/1). Therefore the set of integers {Z} is a subset of the set {Q}. The elements of {Q} are all numbers that can be written in the form m/n, where n ≠ 0.

Unfortunately, it was discovered that not all quantities could be expressed as a fraction. Due to the puzzling nature of these seemingly quirky numbers, they collectively became known as irrational numbers. The set is usually represented as {I}. The elements of {I} are all numbers that cannot be represented as a fraction. The value of  Pi (π), the ratio of a circle’s circumference to its diameter, is one such irrational number.

So these are the sets and partitions that make up the set of real numbers.  This set is usually represented as {R}.  All the numbers you will come across will be elements of one or more of these sets.  And they are all real numbers… well, almost all.  There are numbers called complex numbers which pop up in certain situations, but we’ll leave that for another blog… maybe.

The most recognizable constant  in mathematics is the ratio of the circumference to the diameter of a circle. Today, we use the Greek symbol, π,  to represent this ratio. The existence of this constant has been known for a very long time.  It actually comes from nature, so it was always there, waiting for us to discover it.  The earliest textual evidence of this ratio dates back to the Babylonian and Egyptian civilizations.  One particular artifact fascinates me.  It consists of a list of eighty-four (84) practical problems encountered in administrative and building works.  It is known as the Rhind Mathematical Papyrus, now in the British Museum. It does not explicitly state the value of the ratio.   Instead, one of the problems calculates the area of a circle as the square of eight-ninths of its diameter.  The resulting solution was 3.16.  Explore this fascinating artifact.   Learn how math was used to solve practical problems in the world of the ancient Egyptian civilization.

By the way,  the symbol, π, has been used in this mathematical sense for only the past 250 years.  But that’s a topic for another blog.