The Equality of Robert Recorde

Throughout their education, students will come across the most ubiquitous symbol in all of mathematics. It’s the symbol that defines all equations. It is the equal sign.  But where did it come from?

Robert Recorde (ca. 1512-1558) was a Welsh physician and mathematician. At the age of fifteen, he entered Oxford University, graduating in 1531. In the same year he was elected a Fellow of All Souls College. Moving to Cambridge University he obtained a degree in medicine in 1545. He is known as the founder of the English School of Mathematics and was the first person to write mathematical books in English. He also introduced, among other things, the idea of placing two hyphens in parallel to symbolize the balance of two expressions in a mathematical equation.

He wrote a math textbook with a most convoluted title: “The Whetstone of Witte, whiche is the seconde parte of Arithmeteke: containing the extraction of rootes; the cossike practise, with the rule of equation; and the workes of Surde Nombers” (Published in 1557). You can find and download a digitized version of this textbook here at the Internet Archive. The book covers topics including whole numbers, the extraction of roots and irrational numbers as well as the execution of arithmetic operations. 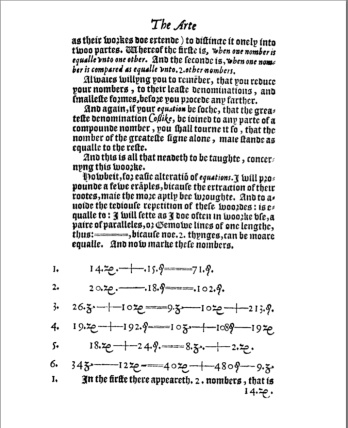 This is the page in which he defines the familiar symbol:

“And to avoide the tedious repetition of these woordes: is equalle to: I will sette as I doe often in woorke use, a paire of paralleles, or gemowe lines of one length, thus: =, because noe. 2. thynges, can be moare equalle.”

He uses this symbol to subsequently express numerous equations, beginning at the bottom of this page. Thus, it can be said that the first math equation to be expressed using this modern notation is 14x + 15 = 71. Thankfully, by the time this symbol was consistently used in the 1700s, the two parallel lines (as well as other symbols he defined) were made more compact.

Robert Recorde is honored with a wall tablet at St. Mary’s Church. It is located in his birth town of Tenby, Pembrokeshire, Wales. It documents his achievements to mathematics:

“To his genius we owe the earliest important English treatises on algebra, arithmetic, astronomy, and geometry: He also invented the sign of equality, =, now universally adopted by the civilized world.”

There is also a display at the Tenby Museum & Art Gallery documenting the achievements of this Welsh mathematical pioneer.

The Vocabulary of Addition

In order to use language to communicate math concepts and skills concisely {language model}, we must learn the terminology and vocabulary of mathematics so that we can express ourselves accurately. Lets begin by learning the English math words associated with the fundamental skill of addition and its associated numerical expressions {number model}.

The numbers that are being added together are called addends.

The plus sign is the mathematical symbol representing the operation of addition.

The sum is the value of the addition of the addends.

Each language and culture uses its own terminology and vocabulary to represent these components of addition. Learning these words and their meaning is one important way the world of language arts and world of mathematics intersects.  One of the most basic tools I use to assess whether a student I am tutoring is fluent in the use of math vocabulary is through the use of flashcards.  I usually just ask the student to identify the component of the expression or equation highlighted in red.  Many times, there is more than one acceptable answer, as you will see in future blogs.