The Standard Algorithm of Addition: Part 3

In the blog “Standard Algorithm of Addition: Part 1,” we learned how to set up addition problems in a vertical format so that we can manually calculate their sum. We also learned the mathematical terms for the components of arithmetic expressions of additions. In the blog “Standard Algorithm of Addition: Part 2,” I used a {visual model} to explain the concept behind this fundamental algorithm using green square blocks and blue rods to represent the addends. In this blog, I will show you how the standard algorithm works {number model}.

First we set up the arithmetic expression in a vertical format (A). Now we will first focus on the ones column and work our way from right to left (B). We mentally add the digits in the ones (9+7=16). Note the sum is greater than 9. This sum is equivalent to 1 unit of ten (blue rod) and 6 units of ones (green squares) (C). I write the digit for the 6 units of one in the ones column under the underline (D). I place the 1 digit of ten at the top of the tens column (E).

Working our way from right to left, we move to the tens column (F). We add the digits in this column noting that we are actually adding multiples of ten (G). Since the sum is not greater than 99, we simply write the sum of the digits in the tens column underneath the underline (H). Therefore, the sum of the addends, 29 and 47, is 76 (I).  It is the most common technique of addition taught to math students, but it is not the only one.  We’ll look at some other addition algorithms in future blogs. 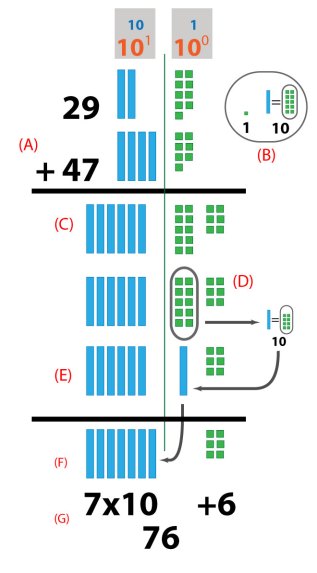 I believe that math students of all ages learn abstract notions by first experiencing them concretely with shapes they can actually see, touch and manipulate {visual model}. we will use of concrete teaching aids such as base-ten blocks help provide insight into the creation of the standard algorithm for addition. In this blog, we will use them to find the sum of two whole numbers, 29 and 47 (A). I will be using two types of blocks (B). A green square block has a value of 1 unit, and a blue rod has a value of 10 units. I represent the values of the two addends using these two blocks. I make sure that they are grouped in the appropriate columns according to the structure of the decimal number system (See “Decimals”). I then add all the blue rods together in the tens column, and add all the green squares together in the ones column (C). Notice that we have more than ten green squares. I group ten of these squares together (D) and replace them with a blue rod (E). This blue rod gets moved from the ones column to the tens column (F). Now we have seven blue rods and six green squares, which represent the sum: 76 (G).

We can use these two blocks to visually add numbers 1-99. Additional blocks can be added that represent larger multiples of 10 so that larger whole numbers can be used.

Standard Algorithm of Addition: Part I

As part of our primary education in mathematics, we have all been taught a standard method for adding two or more numbers together. Students learn how to add a series of whole numbers by following a step-by-step process until they can apply it without making an error. As part of the math education, it is also important that math students understand why this step-by-step process, the standard algorithm of addition, works. 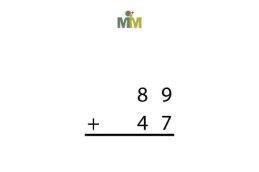 The arithmetic expression, 89 + 47, is expressed in a vertical format. 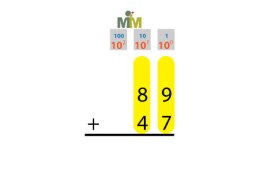 Note how the digits in the one’s column and ten’s column are aligned vertically in this format. 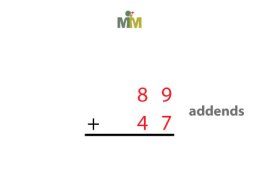 The numbers listed in this format are the addends of the arithmetic expression of addition. 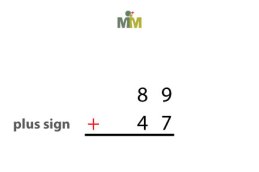 The plus sign, the symbol representing the operation of addition, is placed to the left of the addend at the bottom of the list. 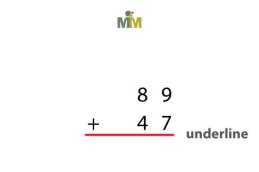 The underline is used to separate the addends from the sum that is about to be calculated. It serves the same function as an equal sign.

The most common way to gain insights into the validity of algorithms is to express its abstract concepts to the math student in visual concrete ways {visual model}. We’ll explore this concrete model of addition in Part II.

The Vocabulary of Addition

In order to use language to communicate math concepts and skills concisely {language model}, we must learn the terminology and vocabulary of mathematics so that we can express ourselves accurately. Lets begin by learning the English math words associated with the fundamental skill of addition and its associated numerical expressions {number model}. 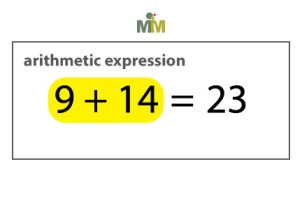 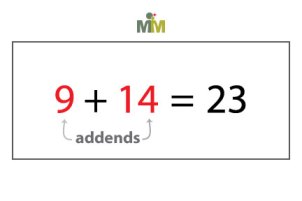 The numbers that are being added together are called addends. 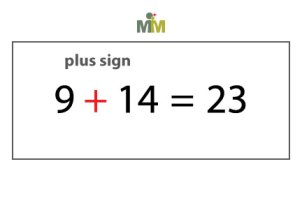 The plus sign is the mathematical symbol representing the operation of addition. 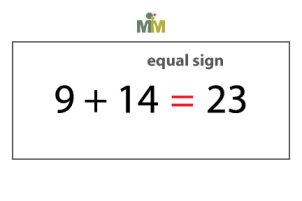 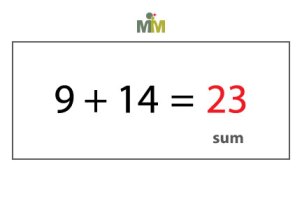 The sum is the value of the addition of the addends. 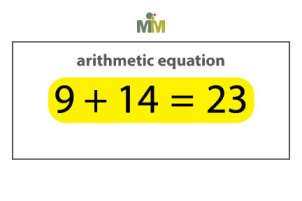 Each language and culture uses its own terminology and vocabulary to represent these components of addition. Learning these words and their meaning is one important way the world of language arts and world of mathematics intersects.  One of the most basic tools I use to assess whether a student I am tutoring is fluent in the use of math vocabulary is through the use of flashcards.  I usually just ask the student to identify the component of the expression or equation highlighted in red.  Many times, there is more than one acceptable answer, as you will see in future blogs.